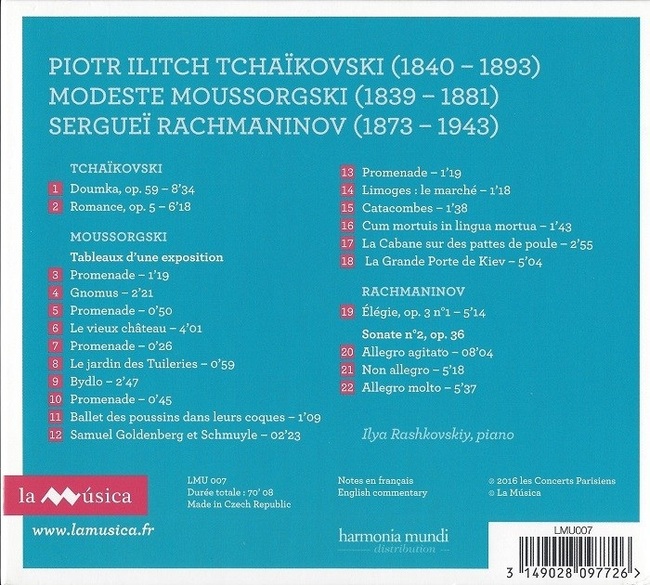 Memories of my native Moldova

When I moved to New York I had the good fortune to enjoy the affectionate support of Kyriena Siloti, daughter of the great pianist Alexander Siloti, to whom Rachmaninoff dedicated many of his preludes. An old lady by then, she was a very highly regarded piano teacher and I felt very intimidated whenever I went to her house: she would tell me that Sergei Rachmaninoff had sat here on this chair and Nikolai Medtner there on that one. So having the two composers side by side on the same recording is a logical consummation in more ways than one.

Not many people know that Moldavia, my country, was ruled in the 15th century by Voivode Stephen the Great, who was an ancestor of Rachmaninoff. Consequently Moldavians regard Rachmaninoff as a national musician and there is a high school named after him in my home town of Chișinău. His portrait hangs in the rooms in Moscow's Tchaikovsky Conservatoire where he worked, so it could be said that in a way I studied under him! I wanted to record the Variations on a Theme of Chopin because I simply cannot understand why they are not as well-known as the Variations on a Theme of Corelli. Rachmaninoff obviously had no idea how Chopin actually played, but he was himself the greatest pianist of the recording era. What is particularly striking in his writing is that despite all the difficulties of finger technique it presents, the treatment of the instrument is always completely natural.

Although Medtner's name is not entirely unknown, his music remains largely unfamiliar. I have had only one occasion to play one of his piano concertos: he wrote three and I was invited by Ren Koering to play the second at the Festival de Radio France et Montpellier. His life was similar to Chopin's insofar as it was almost entirely devoted to the piano. Through his origins, he embodies the combination of Russian soul and German spirit. Far be it from me to downplay his melodic skill, but his genius undeniably resides in a very Germanic sense of polyphony. Medtner was as much a philosopher as a musician and I have always been fascinated by his writings, such as his book The Muse and the Fashion as well as his many letters and his diary. I profoundly admire his conception of music: a goddess who is to be served and whose temple one may not enter without having earned the right to do so.