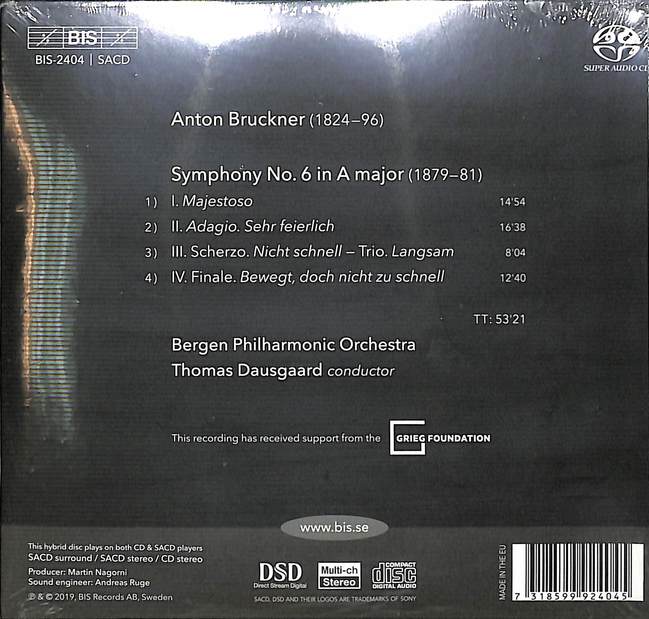 "Anton Brucknerwrote his Symphony No. 6over a period of two years, completing it in September 1881. And for once with this composer, the word ‘completing’ can be used without qualification: known for his habit of reworking and revising his works, Bruckner for once seems to have been satisfied with the result of his efforts. That doesn’t mean that the Sixthhas enjoyed a smoother passage to the concert stage than other Bruckner symphonies, however: The only performance in Bruckner’s lifetime was a partial one, of the two middle movements, and when Gustav Mahler conducted the first ‘full’ performance in 1899, he made a number of substantial cuts and other amendments.
In fact, the true premiere of the Sixthas Bruckner wrote it had to wait until 1935, almost 40 years after the composer’s death. And the work is still something of a Cinderella in the Bruckner catalogue, with far fewer outings in concert halls or on disc than for instance the Fourthor the Seventh. Bruckner called the Sixthhis ‘boldest’ symphony –with a duration of ‘only’ some 55 minutes it is at any rate one of the shorter, but possibly the composer was rather thinking of the remarkably expansive Adagioor the ambiguous Scherzo, or of the way the so-called ‘Bruckner rhythm’ (different combinations of a duplet and a triplet) pervades the work. The present disc is the first in a Bruckner ‘mini-series’ from Thomas Dausgaardand the Bergen Philharmonic Orchestra, appearing together on disc for the first time."