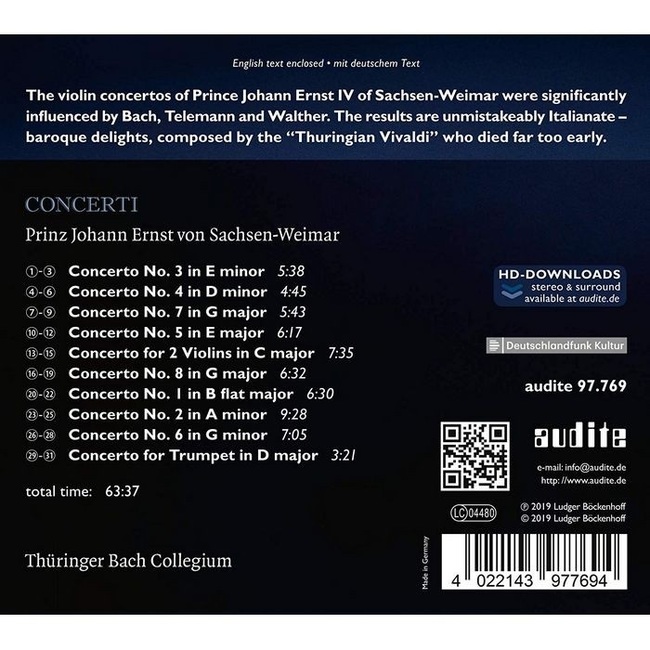 This release is the debut recording of the Thuringer Bach Collegium and marks the beginning of its co-operation with audite. A second album (works by Johann Bernhard Bach) will be released in autumn 2019 and further projects are being planned.

Prince Johann Ernst IV of Sachsen-Weimar (1696-1715) was taught by Johann Gottfried Walther; Johann Sebastian Bach also perused the young prince's compositions and arranged some of Johann Ernst's concertos for keyboard instruments for his own use. Georg Philipp Telemann put the finishing touches to the violin concertos. The results are unmistakeably Italianate: at times brilliantly virtuosic, at other times contemplative and lyrical - composed by the 'Thuringian Vivaldi' who died far too early.

The Thuringer Bach Collegium, directed by Gernot Sußmuth, have recorded the six violin concertos by Prince Johann Ernst - as posthumously published in 1718 by Telemann - with exuberant enthusiasm. These works are combined with two further concertos whose original Weimar court orchestra parts survived: a concerto for trumpet and orchestra as well as a concerto for two violins which survived as an adaptation by JS Bach and was "arranged back".

This pioneering recording revives a central chapter of Weimar's musical history, in which the works of the court composer Johann Sebastian Bach also had their place. The prince's concertos were written at the same time as Bach's Weimar cantatas and provide, as no other body of works, the "soundtrack" to the dynamic musical life in the palace. The musical perspective was a European one: in 1713 a veritable "Vivaldimania" broke out, the Venetian composer's works being arranged, imitated and emulated. This can be experienced in the prince's concertos, written in the finest Vivaldian style.