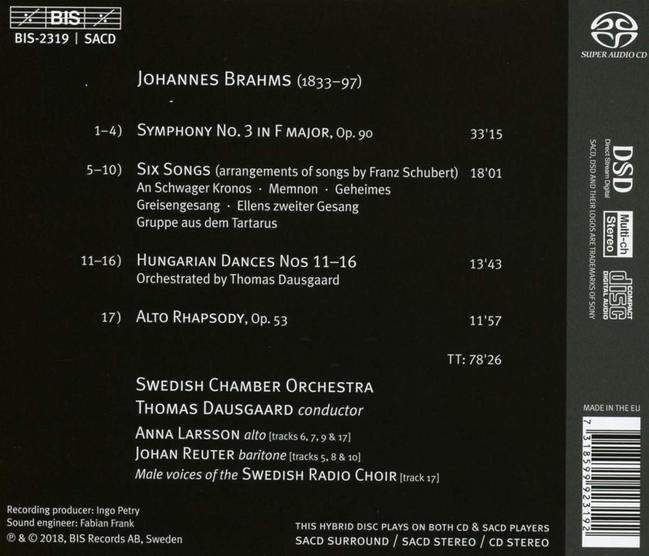 "Having given us acclaimed cycles of the symphonies of Schubert and Schumann, the 40-odd members of the Swedish Chamber Orchestra and their conductor Thomas Dausgaard are well on their way to completing their series of Brahms's orchestral works. Previous instalments have been praised for the transparency and clarity of the performances, virtues that are less than common in this repertoire.

Most recently, the team's recording of Symphony No. 2 was described by the reviewer in Gramophone as 'a refresher course for those who think they know the work better than they actually do', while the German website Klassik-Heute found the Haydn Variations to be 'fresh, cleansed and nevertheless explored to the fullest'. The present disc opens with Symphony No. 3, followed by the quite rare orchestrations of six Schubert songs, with Anna Larsson and Johan Reuter as vocal soloists.

As on previous discs, Dausgaard has included a set of the muchloved Hungarian Dances, in his own orchestrations. The disc closes with one of Brahms's most personal works, the Alto Rhapsody that he composed after having learned that Robert Schumann's daughter Julie, with whom he was secretly in love, had become engaged to another man. For this work, Anna Larsson and the orchestra are joined by the male voices of the celebrated Swedish Radio Choir. "